This is the place where you can find all of my claims in blog crews and claim memes. Will have additions...


♣ I won in a pillow fight against →Camus← of Meine Liebe ♣


♣ I won in a pillow fight against →Lumiale← of Angelique ♣

I tend to forget I have this, better comment so I don’t lose it.

Life’s been...well, I’m still alive, we’ll leave it at that.

Been getting into more anime, mostly male idol series but other sorts as well.

What a week I had!

I reported to the emergency department the Thursday night because I hadn't been able to eat for close to a week but was still bringing something up. They saw me pretty much right away.

My bloods and such were tested and I had lots of ketones so they kept me in Short Stay on a saline drip. Further blood tests revealed low sugar levels and my blood was acidic. I was moved to the Medical ward on the Saturday, diagnosed anorexic. I also had glucose via IV, then they noticed my potassium was super-low on Sunday so they gave me that via IV. (Word of warning, that stuff hurts! They had to do it slowly in half doses so I wouldn't feel like my arm was being snapped in half.) That night, I was hooked up to a portable heart monitor and was also given magnesium via IV. (Two canulas, one in each arm.)

The next morning, I went to the toilet and a nurse rushed in to make sure I was alright. The monitor was hooked up to their computer so they were alerted when I went tachycardic. My heart rate is normally between 90-100, it got up to 150. Had more potassium and then some magnesium gluconate. The doctor made his rounds and informed me straight out that if I didn't start eating, I would require a feeding tube...otherwise I would die. My body was in Refeeding mode so it was important for me to keep eating. I also met my nutritionist and we discussed ways to get through days I lack appetite, how to combat nausea (been taking "wafers" that dissolve in the mouth) and ways to improve dietary intake. I also met a social worker.

The next day, I was still on the monitor and still had nurses rushing in when I walked to the toilet, so we had to come up with a plan. Instead of me walking to the loo, they brought me a pan. (I still had nurses rushing in to ask if I was alright, though I only got to 130 instead.) I spoke with a psychiatrist and was put back on mirtazapine (anti-depressant/sleeping pill).

Next day, my levels had improved so I was able to get off the monitor. My heart rate was back to normal and I was encouraged to take small walks. None that day though, my breakfast didn't agree with me so I spent the day back and forth to the loo. I started taking supplements (magnesium, potassium and thyamine) which were crushed up and mixed into ice-cream for me (though I also had dissolvable phosphate that tasted like lemonade) since I can't swallow pills.

Thursday I got news I had been hoping for...I would be going home! Though it didn't happen until Friday, it was still great news.

I mainly passed my time watching TV, they had a ton of cartoons going on one channel and when the time was right, I would watch Danger Mouse, Pointless (hosted by Alexander Armstrong, new VA for Danger Mouse) and Spicks n Specks. My main visitors were Pa, Tash (and her kids Bryce and Baylee), Dad, two of my aunts, my brother and his girlfriend.

I am happily home again, my dog cuddled up beside me. Just finished breakfast.

So, here is a quick update.

- Had a barium swallow test done (tasted like spearmint)
- Had an ultrasound on my neck done. The size of my thyroid suggests possible Thyroiditis.
- Doctor ordered another blood test to check for Thyroiditis, specifically Hashimoto's Disease.
- Gastroenterologist referred me to a surgeon for further analysis of my thyroid and if I require a procedure.
- Seeing the surgeon in April.
- Still sick, still sore, had some good days (meaning able to eat twice a day and can do light housework) but am back to bad days (can manage once a day, pain spikes, even light housework is too much).

Anyway, it has been two years since I got sick and still have no formal diagnosis. So far, we know I have an auto-immune condition and it is not lupus. Thankfully. But, no signs of getting better anytime soon. It also might be linked to my thyroid.

Seeing my gastroenterologist a week before Christmas. I was meant to see him tomorrow, but it was then moved to December 13, a week after my birthday, and then settled on the 19th. I hope it stays.

I don’t have any plans for my birthday this year. Last year’s attempts at a home celebration were a bust due to my stomach saying ‘nope!’ all day to the point the smell of food had me rushing outside just in case. No point in making plans, they can never hold firm because my condition is unpredictable. So, my 31st birthday will be spent playing Pokemon and watching stuff.

Photos of goodies will come eventually, I just need to feel up to getting up and taking so many photos. They’ll include Sherlock Holmes books and a boxset of the Granada series, more plushies and figures, DVDs...you know, the usual, oh and more books and the issues of Danger Mouse magazine I have.

So yeah, there is my quick update.

Hey, all. Life is same-old, same-old so I won’t bore you with the details I am sure you know are coming. But, basically, yes I am still sick.

Although, I have been watching the Granada adaptation of Sherlock Holmes. From what I’ve heard, the series is pretty faithful to the original works by Sir Arthur Conan Doyle. It stars Jeremy Brett as Holmes, and Watson was played by two actors; David Burke and Edward Hardwicke. Episodes are on youtube and dailymotion, but I am also getting the series boxset in due time.

Anyway, not a lot to share, so no cuts. 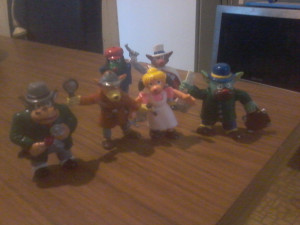 Yep, I recently checked this series out and have loved it! Anyway, these are bootleg figures from Portugal. The characters are...
Smiley, Professor James Moriarty
Inspector Lestrade, Sherlock Holmes/Hound, Mrs. Marie Hudson, Dr. John H. Watson 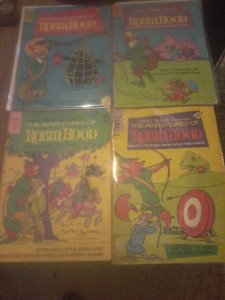 Four comic issues. I got them all from Aussie sellers so yay for not having to pay too much for shipping! They’re in pretty good quality, though I wish they were more careful when inking the comic. Not the sellers the artists. There are times the colours run and Robin and Maid Marian have fully orange faces when their snouts are meant to be white. 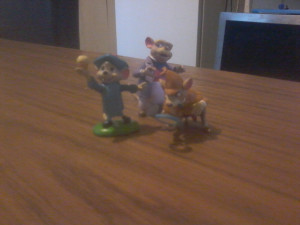 Official chocoball figures that were shipped from Japan. The detail is amazing, and though they were a bit fussy when I was putting them together, they eventually behaved themselves.
Characters are...
Olivia Flaversham, Dr. David Q. Dawson and Basil of Baker Street.

I found out my plush of Tracey is almost finished. The artist is also making a surprise to go with him to apologise for having me wait for six months though I told her I completely understand her schedule has been hectic.

And there we have it!

Not a medical update, still going nowhere with that.

My nephew Bryce is talking more and more. When Tash came over the other morning, I was saying ‘see you, love you!’. Bryce echoed it! It was so adorable!
Baylee, his little sister, can roll onto her back from her tummy on her own now.
I swear, I have the Teary Aunts...I’m so proud of both of them!

Goodies time! There aren’t a lot, so I will just post them under categories but forgo the cuts. 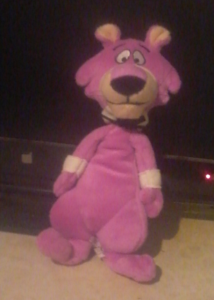 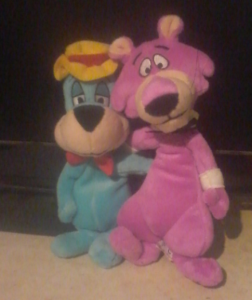 Remember the Huckleberry Hound plush? (Well, if you don’t, he’s pictured with Snag xD) I got Snagglepuss as well. They’re both beanbag plush from Warner Bros. Store dated 2012. 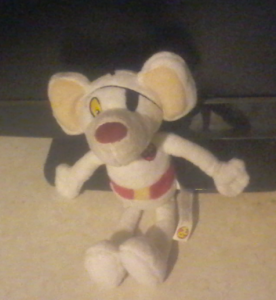 This is my newest Danger Mouse plush. He’s a beanbag plush licensed by Fremantle Media, he could be from the 2000s and is from the same range as my larger Penfold, though is actually the same size as my talking DM. 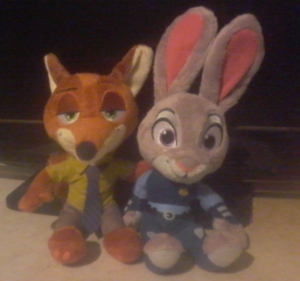 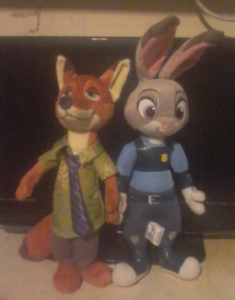 More plushies of Nick Wilde and Officer Judy Hopps!
The smaller ones are TOMY beanbag plush. Nick’s snout isn’t as thin as the taller one and Judy’s ears seem to want to behave this time!
The larger ones are official Disney Store plush. The detail is amazing! Nick’s tie is silk and Judy’s vest is faux leather. They also darkened the tip of Nick’s tail and the tips of Judy’s ears.

Hah, so that’s it! Nothing new coming this fortnight because I was getting a gift hamper for my second-cousin Telisha.

I’ll see you next time, whenever that will be!

Hey, everyone! So, I was lazy and put off yet another goodies post for a few months again. Plus, mood and illness haven't helped. Yes, I am still sick and still getting worse with no answers in sight because my doctors keep giving me the same tests again and again even though we know they have nothing to do with it. I tried walking a block last week and almost passed out when I got back home, half an hour shopping had me in bed in a worse condition for a week. Something is up, but what?

Anyway, enough of the negative stuff. I have so many goodies to share! I couldn't get photos of some but will mention them in their respective categories. Here we go!


PHEW!! So many goodies, huh? Still collecting though and I doubt that will stop anytime soon! Be seeing you next time!

Good news - No cancer or anything like that.
Bad news - Nothing was found, still without answers.

I am being referred to a gastroenterologist and need to do a stool sample test, so while it’s good the doctor isn’t giving up yet, I’m beyond disappointed and all-out miserable that this still isn’t over.

Don’t get me wrong, I am thrilled it’s not cancer! I just...I wish I had some answers by now. I don’t want to be one of those patients that has the doctor give up and say it was nothing, only for me to find out from another doctor down the track that it is something and it’s a big deal. I am even more convinced now that what I have is hidden.

They want me to start Work for the Dole. How can I when I can’t leave the house without a vomit bag? How can I when there are days walking around the house or touching anything at all is too painful?

I want this to be over!!

I know it has been a long time coming, but I have a goodies post to share! It's not that I lacked goodies...if anything, it's just me being lazy.

Okay, the news is over, time for some goodies! These will be done in fandom format as there are a LOT to get through!

So, there we have it! So much stuff! I will be getting more Danger Mouse stuff this year too, mostly figures and plush of DM, Penfold, Colonel K and Professor Squawkencluck (the niece of the original professor), maybe Jeopardy Mouse as well (DM's American female counterpart), all being released thanks to the reboot series released last year.

I'll try not to be so lazy and make more updates so you know I am still here. See ya!
Collapse